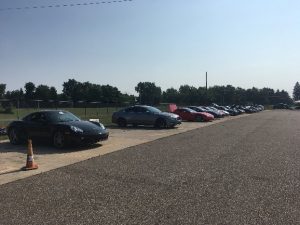 The weather was hot with no clouds in sight. I guess the 5th time was the charm, as we suffered through four prior postponements this season. But, since this was the official IROC date, this was a very good thing. Everyone got their six runs in, with times generally getting better throughout the day.

We had participants from four groups; Furrin Group from Traverse City; MSU Sports Car Club; Western Michigan Region PCA and a couple from Motor-Stadt PCA. Twenty drivers of 19 cars in all. Of those 19, only seven were Porsches; two 911s, two 944s and three 987s. And, of those seven, three represented Motor-Stadt.

We ended up splitting into two run groups — Porsche and non-Porsche. This allowed for volunteers to cover the required timing and cone positions. We are grateful to those non-members who were willing to help and make this a fantastic Autocross. Curt Rosenstengel of the Furrin Group even set up a starting grid so that cars didn’t have to sit in a long line idling in the hot weather. I must admit being in a black helmet in a black-on-black car was not “cool”.

Everyone seemed to have a great time. We even had a couple of wild runs with late braking cone smashing and sideways turns; but all finished in one piece. Fastest time of the day was once again a battle between Conan Dombroski and Matt McFadden. This year’s trophy went to Conan.
Hyung Kim and I were having a battle of the Cayman S’s. In a very spirited, fun competition I was finally able to get the best time on the very last run of the day. Using launch control and Steve Lee’s advice to “look ahead where you want to go, not where you are”, I finally broke the 43 second mark and managed a 42.783. That was good for the third fastest Porsche. I may have to come back in a couple years just to run Spartan Speedway again. What a great track for autocross!

Thanks to all that helped, but especially to MST members Ken Jones and John Gregg who came out to help even though they weren’t driving.