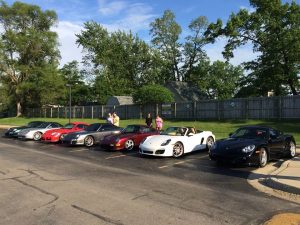 On May 31st the Porsches returned to Hell in the first dinner drive of the year. Seven cars transported a dozen participants to Hell and back. The weather was as fantastic as the food and company.
We gathered at Jackson National on Okemos Rd (just south of I-96) to avoid the construction at Okemos and Jolly. Unfortunately, during the drivers’ meeting I jinxed the drive by saying “hopefully we won’t get caught behind a combine this time”. So of course, we did. But it was on a nice straight stretch so we all got by OK and the rest of the drive was fantastic. Everyone enjoyed a spirited drive and a good meal at Zukey Lake Tavern.

We were able to sit on the upper deck and enjoy the weather and view of the lake. As expected, the conversation was lively and interesting and everyone had something to share. We even had a great discussion on how cool it was to see the spoiler on the back of the Kim’s 911 go up and down. But nothing beats the fact that LeNan and Teri went to the same hair salon.

All those that attended had a good time. And we all hope others can join us in the future.